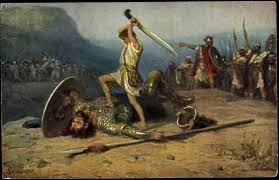 “And the Philistine (Goliath) said, “I defy the armies of Israel this day; give me a man, that we may fight together.”  When Saul and all Israel heard these words of the Philistine, they were dismayed and greatly afraid.” (I Samuel 17:10)

“Then David spoke to the men who stood by him saying, “What shall be done for the man who kills this Philistine and takes away the reproach from Israel?  For who is this uncircumcised Philistine, that he should defy the armies of the living God?” (I Samuel 17:26)

“Then David said to Saul, “Let no man’s heart fail because of him (Goliath); your servant will go and fight with this Philistine.”  And Saul said to David, “You are not able to go against this Philistine to fight with him; for you are a youth, and he a man of war from his youth.” (I Samuel 17:32-33)

“Then David said to the Philistine, “You  come to me with a sword, with a spear, and with a javelin.  But I come to you in the name of the LORD of hosts, the God of the armies of Israel, whom you have defied.  This day the LORD will deliver you into my hand, and I will strike you and take your head from you.  And this day I will I give the carcasses of the camp of the Philistines to the birds of the air and the wild beasts of the earth, that all the earth may know that there is a God in Israel.  Then all  the assembly shall know that the LORD does not save with sword and spear; for the battle is the LORD’s, and He will give you into our hands.” (I Samuel 17:45-47)

The story of David and Goliath is well-known in the Christian world, but within this story are so many spiritual truths.  That is the beauty of the Old Testament.  On the surface it is a history book, but it the Holy Spirit brings out really beautiful truths in these stories.  Here are a few of these truths:

This entry was posted in Daily Teaching and tagged army of israel, christianity, christians, david and goliath, facing giants, faith in God, fear of man, fearless faith, God Almighty, Lord of hosts, the philistines, who is this uncircumcised philistine?. Bookmark the permalink.